At The Moment, College is Hardly Worth It 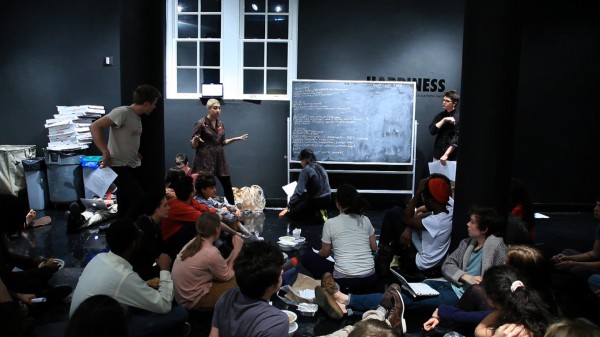 Imagine being paid not to go to college: it may sound strange, but for some people, it’s a reality. PayPal founder Peter Thiel gave 24 entrepreneurs a hefty sum of $100,000 to drop out or skip it altogether and chase their dreams. The American dream nowadays tends to involve the basic logic of “get a college degree so you can get a good job,” but with large and ever increasing tuitions and expensive textbooks hanging over the heads of potential students, this dream is becoming more and more unattainable.

This is the subject of Andrew Rossi’s new documentary, “The Ivory Tower.”  The decision to make a film about the costs of college came from the knowledge that student loan debt was now well into the trillions. Rossi aims specifically to discuss whether or not college is worth it—in the face of the enormous price tag and even bigger resulting debt. We at Fordham feel this too: when that $60,000 dollar bill comes in, some of us undoubtedly wonder whether or not coming here is worth the trouble (I know I have). More and more frequently, students are forced to give up pursuing a dream school because of a tuition bill that costs upwards of tens of thousands of dollars a year.

It’s a stressful time for a college student, and I think that it’s understandable that many are opting out of the process altogether. There’s not much of a point in engaging in a process that’s just going to get you into massive debt and not even guarantee you a job. Then, of course, there’s the necessity of the education as a whole. I may be studying art here at Fordham, but I know that plenty of the big names in the visual arts career field became successful by independently studying, i.e. not going broke to take lessons in an art school. This obviously isn’t the case for every field—you can’t become a doctor without a medical license—but it’s a discouraging new reality for places like liberal arts schools. College students all over the nation can be seen trying to find ways to pay their tuition—asking for donations online, taking commission work and the usual part-time job. But a part time job, especially with a measly minimum wage, is hardly going to relieve, say, a year at Fordham (which can clock in at about $50,000, give or take).

The issue of tuition is one that plagues the minds of many American students, and for good reason. In practically every other country in the world, the price of a college education is nowhere near as steep—and is often free. However, U.S. students don’t get to reap the benefit of low tuitions or no tuitions abroad: we pay a high international price, which, coupled with the high cost of travel and the lack of aid from the U.S. government, means a tuition bill that is even higher than one we would incur at home.

The only option left is perhaps to simply be thrust into the career field—hoping that a high school education is enough for success. Neither of these choices is palatable, making the situation all the more troublesome: this choice between debt or a major gamble is not what this and future generations deserve. American students are being faced with a proverbial forked road, and a tough one at that. The decisions seem to come down to going to college and potentially being bogged down with debt for decades to come or avoiding college altogether and hoping for the best. In my opinion, this should not be the case. People shouldn’t have to worry about lifelong debt just to get educated.

Here at Fordham, there are times when I’m barely scraping by, and I know many other students who are in the same boat as me. Every year, I dread the letters bearing the expensive bill and every time my family decides it’s best for me to follow through and get my diploma. But the cost hangs over our heads, and I often wonder if it’s really fair for my middle class family to drown in debt and loans for years to come just for four years of good schooling. Not everyone graduating from Fordham is going to become a millionaire—so the question is, why should we have to pay as if we are, especially when top universities in other nations have their students paying so much less? Financial aid and a few scholarships can only get you so far if every circumstance is not in your favor—grades, affluence, place of residence and so on. Higher education shouldn’t feel like a gamble, and yet it does now more than ever. And in New York City, where the price tag is always an expensive one, the feeling is all the more palpable.

But at this point, it seems college isn’t really worth all the effort that it once was. Politicians such as President Barack Obama and Senator Elizabeth Warren are debating merely lifting a bit of the weight off students. If someone wants to go to a private school and not go into debt, they’d better hope for a good financial aid package or a full bank account. At the moment, the best bet is either the cheaper public option—or not bothering with college at all.