Set Designing Through Ferretti’s “Design and Construction for the Cinema” 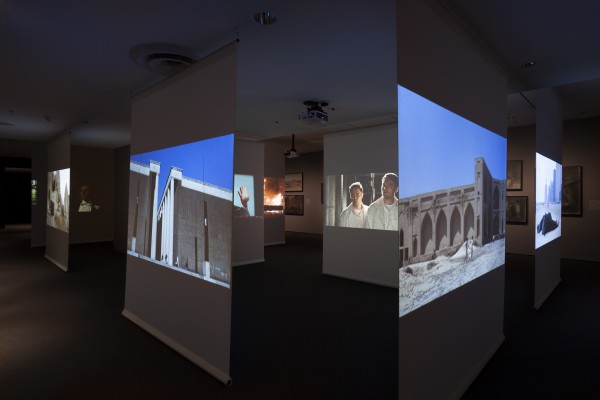 Dante Ferretti’s “Design and Construction for the Cinema” is currently on display at the MoMA through Feb. 9. ( Jonathan Muzikar/The Museum of Modern Art)

Audiences tend to judge a film by its director and actors, but more often then not, those who give a film life—the set designers—go unrecognized.

Professor Jaqueline Reich, the newest chair of the communication and media studies department at Fordham University since September 2013 and a specialist in film and Italian cinema, was recently approached by the New York City Office of Alumni Relations to host a Fordham alumni event.

For its subject, Reich chose the exhibition “Design and Construction for the Cinema” which features the work of the famous Italian set designer Dante Ferretti. This exhibition is running at the Museum of Modern Art (MoMA) through Feb. 9.
According to Reich, this exhibition is crucial to understanding the importance of set and production design in the “collaborative process” of films, two areas that are slowly changing from traditional to computer-generated imagery (CGI), special effects and 3D.

“I wanted to do something that combined my interest in Italian cinema and something culturally available in New York, and I saw the MoMA was having that exhibit,” Reich said.

Professor Reich, who is currently teaching Intro to Film at Fordham College at Rose Hill (FCRH) and will teach Italian Cinema next fall, has a deep passion for cinema. Her areas of specialization are Italian cinema, film history and theory, especially gender and star studies. Currently, she is working in collaboration with The National Museum of Cinema in Turin, Italy, on an analysis of the mysterious film character of “Maciste,” first introduced in Giovanni Pastore’s “Cabiria” (1914), “which was one of the first films to really take production and set design to the next level,” Reich said.

Ferretti is a set designer that had long working relationships with some of the major film directors, such as Federico Fellini and Tim Burton. Some of his major works include “City of Women” (1980), “Dracula” (1992), “Interview with the Vampire: The Vampire Chronicles” (1994), “Shutter Island” (2010) and “Hugo” (2011).

“Design and Construction for the Cinema” reflects the importance of production design in the history of Italian film, a tradition that started in the Silent Era, black and white silent films. A great example of this is “Cabiria.” Ferretti worked on Fellini’s “Nights of Cabiria,” which borrowed aspects of the 1914 original. “There is a long tradition of [set designing] in Italian cinema. In fact, D. W. Griffith, got a lot ideas from ‘Cabiria,’” the original version, “for the set design of ‘Intolerance’,” Reich said, another masterpiece from the Silent Era.

What is really important about set design is a principle called “mise-en-scene.” “This, in film, is all about the strategically placed details and who creates these details are set designers, those touches created character, deep in the plot and create life motifs that run in the film,” the professor said. A good example of mise-en-scene is Fellini’s “City of Women.” “In terms of the spectacular design, it is a very outrageous film, so the set design reflects it,” the professor said. In fact, what is revealed at the end of the movie, “spoiler alert,” Reich laughed, “is that it is all a dream.”

“Design and Construction for the Cinema” promises to be a “very interesting multimedia display,” Reich said. Starting from the top part of the museum, in one of the smallest theaters, the exhibit expands downstairs where screens hanging in a loop constantly project scenes from Ferretti’s work, accompanied by photos and set design plans, “which are really works of art,” Reich said. At the exhibit, the audience can see how Ferretti’s work has evolved his practices of set designing from the traditional sets of black and white silent and color movies, to 3D and CGI films, such as Martin Scorsese’s film, “Hugo,” in which the original clock is featured.

The increased frequency of special effects in films is a trend that has tremendous potential, according to Reich, “but it is also something that can look fake and phony.”

“A film like ‘Hugo’ on the other hand, also has incredible special effects in terms of 3D technology, which recreates the story of cinema.” The film tells the story of Georges Méliès, one of the early pioneers of film. Through 3D technology, it was possible to recreate the effect that early cinema had on spectators. At the end of “Hugo,” there is a key scene that recalls how the first screening of one of the earliest French movies, “The Arrival of a Train at la Ciotat,” startled the audience.

“‘Hugo’ has a scene at the end where the train is coming into the station and there is a chance that someone is going to get run over so it stops. What happens is that it crashes into the station,” something that, in 3D, looks real. The French movie “had people running from their seats because people thought that the train was going to come and hit them.” This is something perfectly recreated by CGI in Hugo, according to Reich.

“Design and Construction for the Cinema” is not only crucial because it tracks the diversions between traditional set designing and special effects, but it also shows how film intersects with other disciplines. “The models that [Ferretti] built for his sets are incredibly architectural. It shows how film relies on architecture for a lot of its production design,” Reich said. Ferretti, like many other set designers and directors, designed operas, such as Howard Shore’s “The Fly” (2008).
“I love to see that intersection between theater, stage, opera,” the professor said.

On the importance of set designing and its connection to the MoMAexhibition, Reich said that we, the audience, should realize that “while film may reflect a director’s vision, there are so many people who contribute to film in many ways that an exhibition like this reinforces it…it is a collaborative process”.

Professor Reich will give a tour of “Dante Ferretti: Design and Construction for the Cinema” on Feb 5. The event will consist of a lunch prior to the tour for a total of $60 for alumni. For those who are interested or curious about film studies, Reich recommends a visit to the Museum of the Moving Image in Astoria, often referred to as MoMI, which features exhibits on video games technology as well as traditional old cameras.