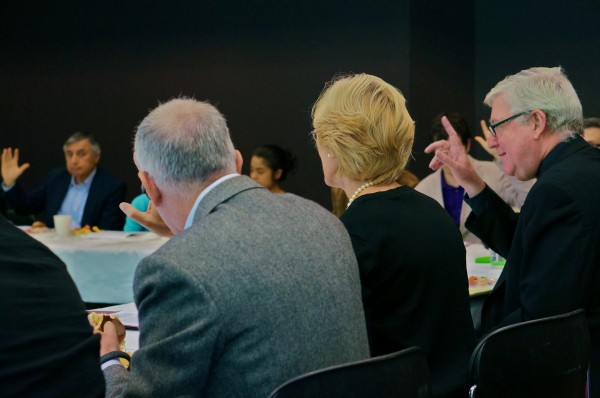 On Thursday, Nov. 14 at 11:30 a.m., College Council held its second meeting of the 2013-2014 academic year in the Student Lounge at Fordham College at Lincoln Center (FCLC). The meeting focused on modifications to the communications and media major and the process of registration. Announcements regarding prospective students’ attendance to the open houses, registration in FCLC and the progress of the new law school and residence hall were also made and discussed during this meeting.

In addition to the potential troubles to students, the mandatory minor also puts pressure on the department. “[It pressures the communication and media department] to offer more courses that double and triple count,” Jackaway said.

By eliminating the required minor, Jackaway hopes that students will have the opportunity to explore outside the communication and media studies major. “Students should have the freedom to choose their own journey and explore outside of their major,” she said. “We voted as a faculty members [in the communication and media studies department] to eliminate the minor.”

However, most of the professors and student representatives present at the meeting agreed that the minor should be eliminated. A motion was passed to send this issue for further discussion.

Rev. Robert R. Grimes, S.J., dean of FCLC, also discussed the issue regarding simultaneous registration with the two colleges, FCLC and FCRH.  According to Mark Mattson, associate dean of FCLC, all students were struggling with registration. To better the process of registration, student representatives proposed the following: switching the start time for registration to later in the day, adding additional seats or classes for core classes, removing some overlap between core and major requirements and requiring more time for students to speak with their advisor.

Like students, council members expressed problems with the process of registration. “There is some mysterious stuff going on with this system,” Associate Professor of Economics Shapoor Vali said in response to registration.

A majority of the room agreed on a proposal to return to the previous process of registration, during which FCLC students registered before FCRH.

Grimes announced that there was a 91 percent increase in perspective student attendance to the senior open house and the fall preview. “[Senior open house] ran successfully. In the afternoon session, we ran out of standing room,” he said.

In addition, Grimes announced that there was a 74 percent increase in early action application to FCLC. “We spent a significant amount on advertising, which I suspect contributed to this increase,” he said.

Lastly, Grimes made an announcement to the progress of the new law school and residence hall. According to Grimes, renovations begin when the current law school moves into the new building. Quinn library will be officially moved after the new space is renovated. “All the infrastructure has to be replaced; it should take 18 months until that is finished,” he said.