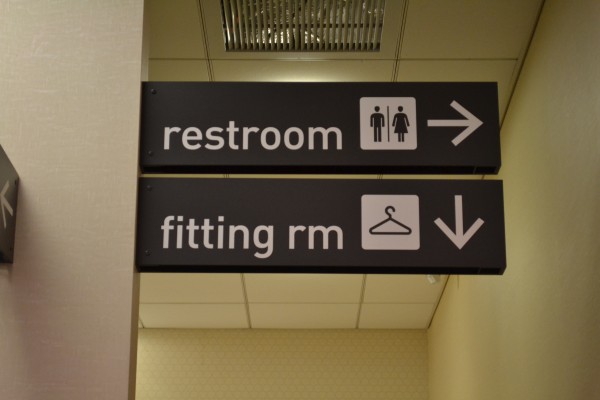 This past summer, I started my job at a local department store. Hired to work in the clothing department, I spent many days and nights working everyone’s least favorite job: the fitting room attendant.

To debunk people’s usual reaction to this part of my job: no, it’s not easy. I don’t just stand there and give people tickets. The fitting room attendant often serves as security, works as the store operator by answering phone calls, organizes returns, packs away unsellable items for salvage and cleans out the fitting rooms.

I probably couldn’t even begin to tell you the number of times I say, “Please bring everything out when you’re done!” in a day, yet I could probably count on one hand the amount of times people actually bring everything out when they’re done. People are disrespectful to retail employees, usually without even meaning to be. They generally figure “they get paid to clean this up, this isn’t my responsibility,” but that’s no excuse to leave mounds of clothes and garbage in the rooms.

Recently, an anonymous retail worker from upstate New York opened up about the horror stories of finding diapers and condoms in fitting rooms. I’ve yet to find a used condom (knock on wood!), but I’ve found more diapers than I’d like to recall in my days working in retail—and not just in the fitting rooms. At the store I work at, the clothing department is also responsible for looking after the baby care department and oftentimes empty baby food jars, juice pouches, wipes and even dirty diapers would be shoved in the back of shelves, only to be found upon a customer complaint or at the very end of the night during cleanup. The two worst things I remember finding in a fitting room were the bottoms of a two-piece bathing suit that someone had tried on, with blood stain on the crotch and a used tampon on the floor under the bench.

Another time, a man slurping a blue Icee drink asked if I had a trashcan behind my counter. When I said yes, he threw his half-full cup over the counter, which ricocheted off the wall and splattered everywhere—including all over my light khaki pants—before landing in the garbage. Instead of apologizing for making everything blue and sticky, the man high-fived his son and continued to look for new sneakers.

Retail employees are not there for your amusement or to pick up after you and your children. There are going to be bad days in any industry, but when my “Hi, how are you today?” greeting is completely ignored on a daily basis or returned with vulgarities as far as the forbidden c-word because of long lines or malfunctioning receipt printers, it’s crossing a line. People lash out at retail employees in ways they most likely never would to anyone else. Customers shouldn’t take advantage of their presence or make their job any harder.

Remember: all it takes is one really grateful customer to make employees feel like they truly are respected and important.