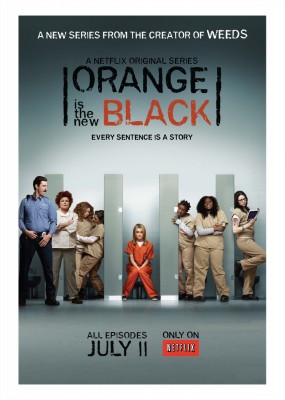 (Courtesy of Lionsgate televsion/Netflix) Orange is the New Black's discussion portal is going to take place on Oct. 31 at McMahon

On Thursday, Oct. 31, Fordham College at Lincoln Center’s (FCLC) Office of Multicultural Affairs (OMA) will host a sustained dialogue about “Orange is the New Black,” one of Netflix’s new series, in McMahon Hall. “Orange is the New Black” is a dramedy that follows the incarceration of wealthy New York yuppie, Piper Chapman, played by Taylor Schilling, FCLC ’06. The cast of characters is mostly female and racially diverse, and Chapman’s preferential treatment arouses questions of class preference and her observations reveal corruption amongst the prison authority.

Released on July 11, the Netflix original series has quickly earned a faithful and passionate following.   “Orange is the New Black” is now Netflix’s most popular show, surpassing the cult comedy “Arrested Development” and the critically acclaimed and Emmy-winning, “House of Cards,” according to the company’s October earnings report.

Why has this show, based on the memoir of the same name by Piper Kerman, been so successful in engaging viewers? Perhaps, it is because “Orange is the New Black” dares to consider subjects that television, until this point, has ignored or merely jested at: racial diversity, religious conflict, class conflict, gay rights, transexuality, prisoner rights and more. Chapman is treated differently by her supervisorsbecause she is an upper-class, blonde woman and is often confided in as such. The inmates divide themselves according to race and the latter part of the first season is dedicated to a religious struggle between Chapman and an ornery Christian inmate, Pennsatucky.

“Orange is the New Black” provokes discussion because of its portrayal of race and identity. Sophia Pertuz, assistant dean and director of OMA, realized that the show demanded discussion. “When I was done watching the show I needed to talk about it and in the office everyone had something to say,” Pertuz said. “We needed a forum to discuss these things.” The “I need to talk about this” reaction has been almost universal, as shown by the endless online “Orange is the New Black” forums and the floating rumors about the second season online.

The issues raised by the show are heavy and conducive to heated arguments, but the dialogue aims to highlight the good in “Orange is the New Black’s” execution. “We’re just really intrigued by how much complexity they were able to fit into the show and we’re aiming to unpack that,” Pertruz said.

In an interview with NPR’s Michel Martin, Laverne Cox, who plays Sophia Burset, said, “I think that the wonderful lessons that ‘Orange Is the New Black’ is teaching us is that it shows our industry—the entertainment industry—that you can cast women of different races, you can cast different ages and body types, and folks will tune in and be interested. And the public is craving that.” Cox is transgender and many of her roles before “Orange is the New Black” were on reality television, where her differences were exploited as a spectacle.

The event will provide a forum that contextualizes the show in a way that’s comfortable for everyone. “We want to benefit those who watched it because they’ll get to discuss all of the different issues that are brought up in the show,” Pertuz said. “To those who have not watched the show, I extend a spoiler alert.”