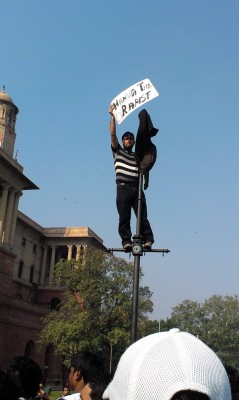 In December of last year, the Delhi rape case grabbed the world’s attention and focused it on the issue of sexual violence in India. The violent gang rape of a 23-year-old physiotherapy student inside a moving bus in New Delhi resulted in her death, causing outrage not only in her country but across the world.

Once again, the case is under the spotlight as the verdict was released on Sept. 13: four of the men were sentenced to death. We have to wonder whether this is the right step for India to take with respect to improving women’s safety and changing its rape culture. Should the death sentence ever be an option? Though some argue the death penalty is not a crime deterrent, I think that sentencing these men to death sends a strong message: sexual violence against women will not be tolerated and attackers will be held responsible.

Such a strong message is necessary to counteract the deep influence of cultural norms that excuse rape. In a culture that holds women responsible for their misfortune, it is crucial that everything that can be done to change this attitude is done. The verdict of this case may not keep rapists from attacking; however, it would mean the world to a rape victim to know that it is an unacceptable, punishable crime, in which the only guilty party is his or her attacker.

Some argue that setting this precedent of the death penalty for rape can potentially discourage future victims from reporting their rapes, considering that, according to National Crime Records Bureau, 98% of victims in India know their attacker and are often related to them. However, we must keep in mind that the crime that these men committed was unusually heinous. Not only did they rape the woman, but they tortured her so brutally that the doctors could not save her life. This case does not set the precedent that every sex offender will be sentenced to death; because the magnitude of the Delhi rapists’ offense was greater than most rape cases, the magnitude of their penalty was greater as well.

But four men sentenced to death won’t end sexual violence. What it can do, however, is contribute to a shift in how rape and rape victims are viewed in Indian culture. The message that rape is not tolerated emboldens women and prompts them to come forward and report their cases. The criticism of the death penalty is understandable, but in this specific case, the sentence will have a long-lasting effect that contributes to something much larger: the fight against sexual violence.