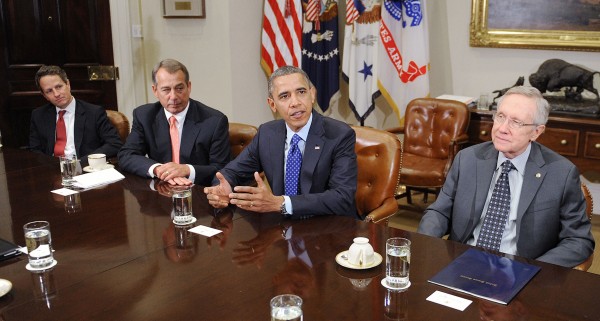 Failed negotiations and a budget standoff prompted the first government shutdown in nearly two decades, beginning Oct. 1 at 12:00 a.m. The Senate’s decision to kill the House of Representative’s spending bill, which was paired with several measures regarding changes to the Affordable Care Act, resulted in the furlough of almost 800,000 federal employees and the closing of over 400 national parks, among other effects.

The last government shutdown began in December 1995 under President Bill Clinton and lasted 21 days. Luke Zaro, Fordham College at Rose Hill ’16 and president of the Fordham Republicans, said this time around, the shutdown is “going to last as long as there is no conversation.”

This “conversation” refers to the Republican-led House’s proposal, which included a call for a committee between the two chambers of Congress in order to find a compromise, which was struck down by the Democrat-led Senate.

“I think this is a mistake by the Democratic party, specifically [Senate Majority Leader] Harry Reid and President Barack Obama’s leadership, to not partake in conversations,” Zaro said.

“One of the biggest insults is that, at the eleventh hour, you had the Republicans saying they wanted to have a conference with the Senate Democrats. The Democrats, since April, have asked for 18 different conferences with the Republicans asking for some sort of compromise to get the spending bill forward, to get budget moving forward. But all 18 times, since April, they’ve declined,” Billotti said.

“Essentially, [the Republicans] are trying to pull [the Democrats] into the driving room on the Titanic. ‘Come on in here so that we can go down together,’” Billotti said said of the Republicans’ request for a committee.

On a potential compromise, the leaders of the political clubs had different ideas on what a fair compromise would entail or if any actually exists.

“I don’t think there should have been much of a compromise by ways of Obamacare,” Billotti said. “The Republicans are demanding that the Democrats give up on a piece of legislation that was passed by 60 senators, 219 representatives, signed by the executive branch and passed by five of the nine Supreme Court Justices. It’s unrealistic. It’s almost unprecedented.”

Zaro disagreed, saying that a delay will be effective in helping conversations between the two groups and help expedite a return from the shutdown.

“Initially, a lot of Republicans wanted Obamacare stripped completely, defunded completely,” Zaro said. “I think at this point in time an appropriate compromise would be to delay it. There are a lot of problems with the law and both sides have recognized that; even an author of the law [Sen. Max Baucus, D-Mont.] has called it a ‘trainwreck.’”

“I think a delay would be something to get the government back up and functioning and give the public and Congress time to decide, ultimately, what they want to do with this law,” Zaro said of his hopes for a potential solution to the shutdown.