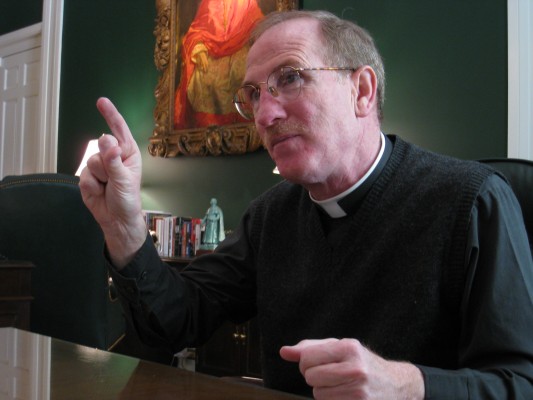 On Sept. 21, Father Matt Malone, editor of “America”, and Father Joseph McShane, president of Fordham University, appeared on the Charlie Rose Show to discuss Pope Francis’ views and priorities for the church’s spiritual doctrine and mission.

As mentioned in the New York Times article, “Pope Says Church Is ‘Obsessed’ With Gays, Abortion and Birth Control,” Pope Francis criticized the church for putting dogma over love.

“What I took out of [the New York Times article] is the following: the church is obsessed with his pastoral role and he does not want the church to be caught up in all the conversation and all the debate,” Charlie Rose said on the PBS interview. “[The church] forgets, for him, to serve the poor.”

According to McShane, Pope Francis is setting a model for what the church should be. “This is a moment when the Pope is trying to get its pastoral bearings for the 21st century […] he modeled for us what the church has to be: it is missionary and filled with mercy,” he said. “He speaks about the poor, as whom you will hear the voice of God calling us to a new conversion of heart.”

However, in this PBS interview, Malone stated that the church is undergoing a powerful transition in the tone of gays, abortion and birth control. “The doctrine does not change; [the Pope] isn’t changing the church’s teaching,” Malone said. “I would announce, though, the power of this shift.”

According to McShane, the Pope is urging the church to look at everyone through God’s eyes. “We must try to look at each person through God’s eyes; would God look at a person who is gay, or [a person] involved in something the rest of the world would find unacceptable, with kindness and mercy? That’s important,” McShane said.

“That’s the way he sees his ministry: reaching out, and saying, I don’t have a barrier between you and me; we are on the same boat, we are both sinners, and I love you. That is an arresting experience for us,” McShane said.

According to the Pope’s interview in “America,” unless a new balance is found between the church’s doctrines and spiritual mission, “the moral edifice of the church is likely to fall like a house of cards,” Pope Francis said.