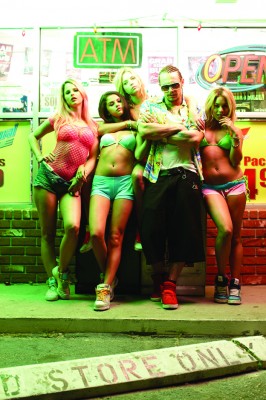 A few weeks ago I got this email inviting me to participate in a college conference call with Harmony Korine, the director of “Spring Breakers,” and Ashley Benson, one of the stars. You know, that movie with Selena Gomez doing bong hits in a seedy motel room with a grill-ed-out James Franco. Obviously, I couldn’t say no, and I responded immediately that I would love to participate. I received an email telling me the number I needed to call, a password I needed to join and a time to call for the next afternoon.

As I realized that I would be going into the conference call blind as to what I was actually doing, I threw myself into researching “Spring Breakers.”

I had already seen the movie, so I knew that I thought it was beautifully shot, but ultimately insane. I Wikipedia-ed Korine and Benson. I read articles about reactions to “Spring Breakers” and reviews and behind the scenes and anything else I can find. I compiled a page full of questions. I was totally ready for this, besides not actually knowing what this was going to be.

Skip forward to the next day—I decided to sit in The Observer office with a recorder plugged into my phone. I had my questions in front of me and another page for doodling. I called the number I had been emailed five minutes before the call was set to begin and was asked for my password. I nervously read off the password and listened to that specific brand of hold music; still trying to figure out what exactly I was doing.

About four minutes after the interview was scheduled to begin, a rather sassy sounding woman came on the line and explained that everyone except for Korine and Benson had had their line’s sound turned off. If anyone wanted to ask a question they would have to press “1” and they would be put in line to be turned up. Sassy Woman then announced that the conference call had begun and that was that. Korine and Benson were told to start and both seemed as confused, if not more, than I was about what to do and say. They awkwardly said hello to each other roughly eight times before Sassy Woman came back on to announce the first question.

I listened to the first two questions, which asked for ruminations on the provocativeness of the film and its score, before pressing “1” and putting myself in line to ask a question. Sassy Woman announced question after question.  I listened for hour and a half and—spoiler alert—I never actually got to ask a question. I sat and listened to a range of serious and jokey questions and Korine’s and Benson’s increasingly hilarious answers.

Or a boy named Paul getting his turn to ask a question and not being on the line so that Sassy Woman had to sassily repeat his name three more times. Paul then clearly ran to his phone from across the room repeating a not so very nice word.

Or the girl who asked what the craziest thing that happened while preparing for filming in St. Petersburg and Korine explained the group of gay men he found that had burrowed themselves into the floorboards of a motel and were snorting Ritalin daily.

That question was soon followed by a series of men explaining to Benson how much their girlfriends or sisters loved “Pretty Little Liars.” One particular student’s girlfriend even wanted to explain her massive lesbian crush on Benson.

So I sat and listened to all of these ridiculous antics for an hour and a half—from who they would most like to go on spring break with to their mindsets at the time of filming. My name never got called to ask a question, so I just sat and listened for the whole time. Benson and Korine ended the call with “love yas” and “talk to you soons” and hung up. I unplugged the recorder and transferred the file onto my computer to go over the transcript. And the recorder had been off the entire time.