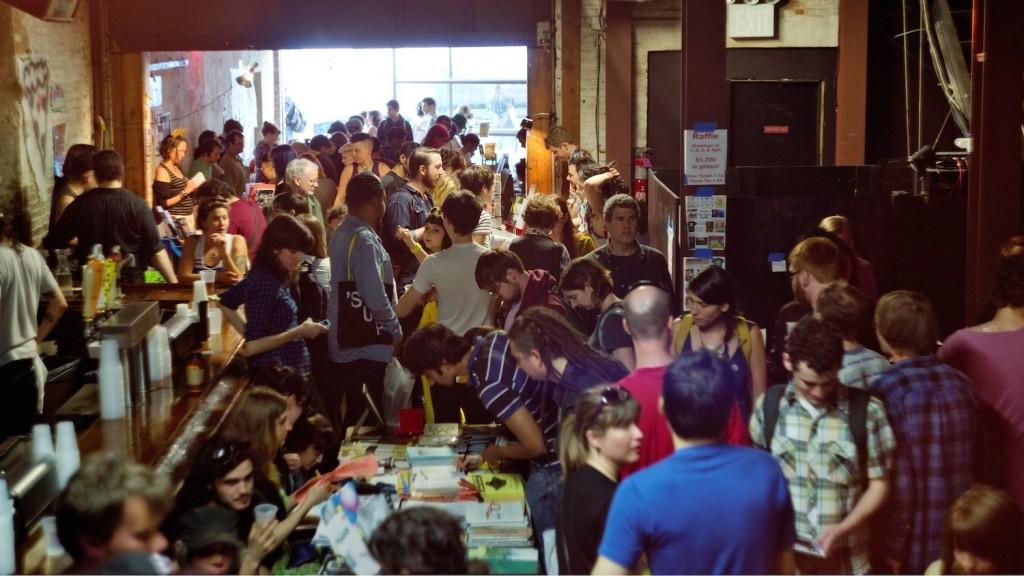 A crowd at the 2012 Brooklyn Zine Festival. (Courtesy of BrooklynZine/Photo by Eric Epstein)

For people who enjoy creativity in the form of essays, comics and illustrations a festival dedicated to magazines approaches the neighborhoods. The second annual Brooklyn Zine Fest (pronounced Zeen) returns to Public Assembly on Sunday, April 21 in Williamsburg, Brooklyn. This event breeds a feted atmosphere and showcases self-published magazines of featured writers and artists at a price range between $1-$10.

According to the Anchor Archive Zine Library, noted on Brooklyn Zine Fest 2013’s official site, “Zines are self-published magazines made outside of mainstream press and media, by all kinds of people about all kinds of things.”

Since last year’s Brooklyn Zine Fest made for a surprising and successful turnout, the organizers of Brooklyn Zine Fest 2013, Matthew Carman and Kseniya Yarosh discussed this year’s goals and expectations of the event as well as what is included for attendees.

The Brooklyn Zine Fest is set up the same way a craft or art fair would be with all of the different self-published works presented on tables. Ksneiya Yarosh said, “Zines are less filtered and more personal. It is a quicker way of communicating personal aspects of your life and your interests.” Yarosh said, “This year seems bigger because we have about 20 more participants than we did last year.”

This year there will be 84 exhibitors with a wide collection of zines includes anything from relationships/dating to non-fiction writing and poetry (the list of subjects is endless). “We want to keep growing and have as much variety and different subjects covered,” Yarosh said. The organizers Matthew Carman and Kseniya Yarosh even have their own zine called “I Love Bad Movies.”

For those who are already familiar with zines, Matthew Carman said, “They are the ones who come to meet the people behind the zine that they already like.” And on the other hand, for those who are just recently learning about zines, “This might be their first exposure to self published magazines” Carman said.

Ultimately, the experience will be different for each person depending on their acquaintance with zines, Yarosh said, “The Zine Fest perpetuates the zine community but also makes people aware of this culture who have never heard of zines before.”

The Brooklyn Zine Fest is open to the public and is free to attend.