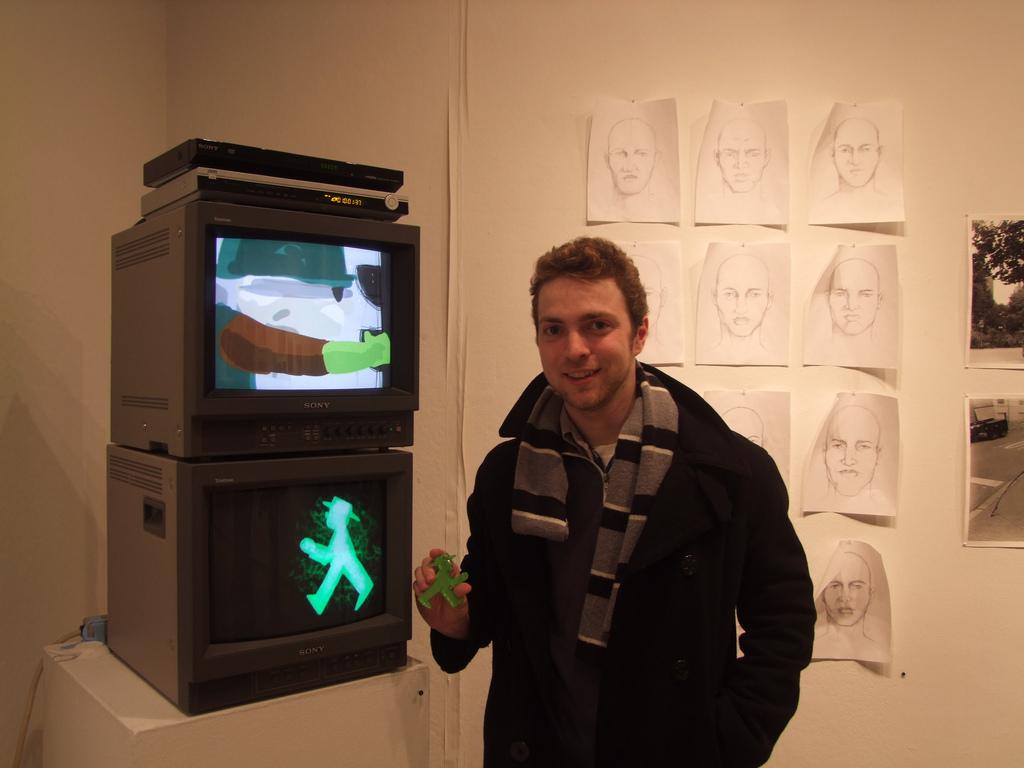 Tim Leuke, FCLC '13, with his work in the senior exhibition in the main gallery. (Ludovica Martella/The Observer)

A long-awaited moment for students graduating from Fordham’s visual arts department has finally come. Beginning March 21 and continuing through May 21, 28 senior students are exhibiting their work in both of the Lincoln Center campus’ major galleries. In groups of three or four, their final works are being shown in both the Center Gallery in the Lowenstein Lobby and the Lipani Gallery in the visual arts wing of Lowenstein’s lower level.

Art students from both Fordham College at Lincoln Center (FCLC) and Fordham College at Rose Hill (FCRH) are part of the Senior Moments exhibitions. The selection process for the exhibitions goes mostly through the fall semester Visual Art Senior Seminar, conducted by Professor Stephan Apicella-Hitchcock, and curator of the two art galleries at FCLC.

Many students who attended the Visual Art Senior seminar said that the challenge of the class was to collaborate with other art students from all different art concentrations. The Senior Moments exhibit series includes artwork of all different mediums, including photography, paintings, graphic design and several types of animation such as short videos exposed through different monitors.

“The most challenging part of the seminar is that it involves art students of every genre,” Elle Radan, FCLC ’13, said. “Being the only painter of my class, I learned an important lesson.”

“Before the seminar, I was used to getting feedback only from painters” Radan said. “Having people from different artistic backgrounds in the class definitely made me grow as a person and as an artist–my art became ever-evolving.”

In the reception of the exhibition series, which took place on Jan. 30 in the Lipani Gallery, Radan and other seniors exhibited a preview of their work. Radan presented several paintings, which suggested mosaic patterns, almost representing “stained glass windows,” she said. Radan’s final work will be exposed at the Center Gallery along with the ones of two of her classmates, from May 15 to May 21.

Apicella-Hitchcock said that the main goal of the seminar was to “create between the students a sense of community to the point where they don’t need me anymore.” Students are challenged to learn from one another, especially in a scenario where they all come from different art concentrations.

These conditions have been interesting for Tim Luecke, FCRH ’13, one of the two animators to be exhibited as part of the Senior Moments exhibition. “Just lately more people are becoming involved in animation design here at Fordham,” Luecke said. “I heard that there is going to be a new concentration in Animation.”

Even though Luecke is graduating and won’t be able to take advantage of the facilities that the new visual art concentration will provide to animation designers, Luecke said that he didn’t encounter many difficulties in developing his work during his studies. Luecke stated that the university provided him with some of the required material to make animations, such as special drawing tablets, that serve to project the work on the computers and edit them.

Luecke’s work was so well appreciated by Fordham that the administration asked him to make an animation to introduce “The Cardinal and Colbert,” last semester’s event featuring Stephen Colbert and Timothy Cardinal Dolan. For his Senior Moment exhibit, showing later this month, Luecke worked on a project that will have as main characters two animated “ampelmann”–Berlin’s traffic signal men. Luecke became intrigued by the amplemann when he visited Berlin during a Summer Art Program. In his project, the two amplemann play the “angel” and “devil” of a young architect who is not satisfied with his job and struggles with making some life decisions.