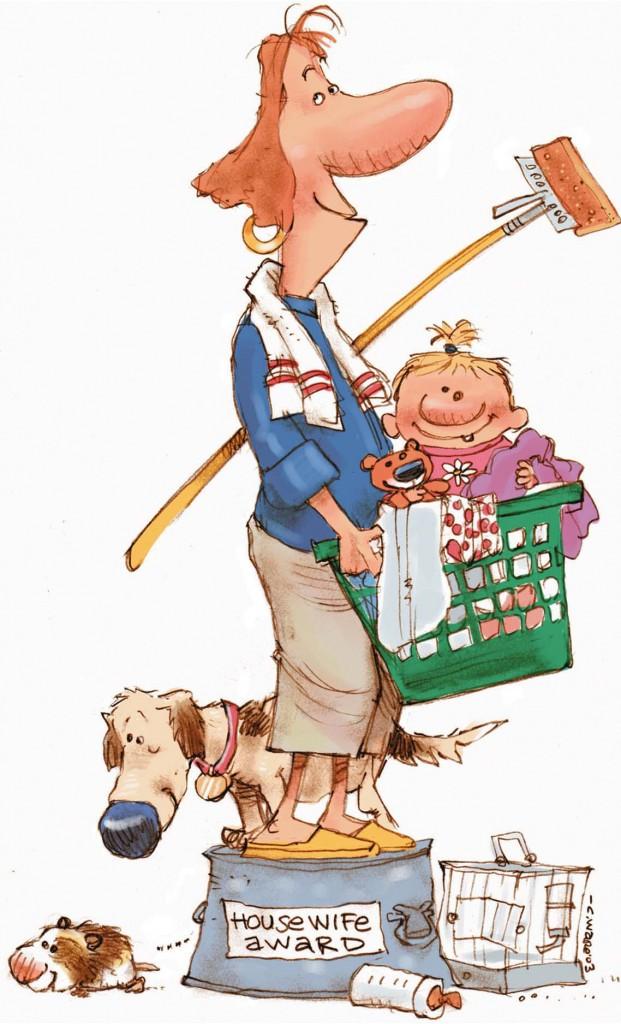 Despite the stereotype, housewives can be feminists just as working women can. (Chris Ware/Lexington Herald-Leader/MCT)

The cover story of the March 25 edition of New York Magazine by Lisa Miller is titled “The Feminist Housewife.” It’s about “a new breed of modern women” that choose to stay at home while their husbands work to financially support the family.  Despite the fact that they chose to adhere to the traditional nuclear family role of a stay-at-home wife, many of these women, Miller argues, identify as feminists.  And who’s to say they aren’t?

Feminism is about the freedom of choice—to choose your partner or to be single, to choose your elected official, to choose whether or not you want to be a mother, to choose your career, to choose how to run a household or to choose to have it all.  Women who choose to sacrifice a salary to commit solely to the responsibilities of a homemaker and parent can still be feminists, as long as they are aware of their freedom to do so or choose otherwise.

Of course, housewives haven’t always been seen as liberated. Fifty years ago, in her pioneering book “The Feminine Mystique,” Betty Friedan described “the problem that has no name”–the silent, droning agony of housewives who, in the daily monotony of caring for their kids and husband, felt invisible, trapped and dismissed. Somewhere between cleaning the house and cooking dinner for the family, these women lost their sense of identity and merely became glorified household appliances and a source of support for everyone in the home but themselves.

But that was 1963, when women had few choices other than to get married and become mothers. Sure, girls went to college, but usually with the intention of finding a husband there, not to get a proper education. What’s more, once unmarried women reached a certain age they were viewed as spinsters or social outliers. While there are most certainly women today experiencing “the problem,” fortunately, we can say that we’ve come a long way, baby.

What many presume about feminism, thus what the stigma attached to the “F” word has become, is that feminists want dominating power—to make men subservient to women to make up for centuries of oppression.  But feminism to me, as it is to many other proponents, is about working for equality—for women and men to be viewed, treated and respected as equals.  So, if a couple decides to divide the responsibilities of running a family in a certain way, if the decision is mutually made, then who is to say there is an imbalance of power?

Perhaps it’s true that these housewives are perpetuating the sexist belief that women are the best caretakers, therefore should be the one to stay home.  But can we blame them for this, given the fact that, especially in today’s economy, many families can’t afford full-time nannies? Regardless of gender, someone has to bring in an income?  If it so happens that the man in the relationship has a higher-paying job, it would make sense to keep that income to support the family.  Likewise, if the wife makes more, her husband should be the one to stay at home with the kids.  The point is, the situation is subjective to the family, and can’t be judged by an outsider as “sexist” without considering the circumstances.

One of the worst ways to view feminism is to make it into a single, narrow, concrete “ism,” and the worst way to view feminists is with a pre-conceived idea of what a feminist looks like.  Any person can be a feminist, whether they work for their boss or a couple toddlers, and that’s the beauty of today’s day and age.