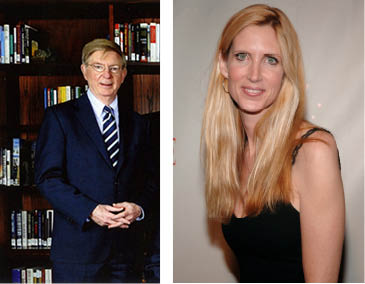 The College Republicans announced on Feb. 27 that conservative journalist and author George F. Will has been approved to speak at Fordham, in place of conservative personality Ann Coulter.

The typical cost of Will as a guest speaker is listed as “$40,001 & up,” according to the Washington Speaker’s Bureau’s website, an agency that represents Will in speaking engagements.

However, according to Theodore Conrad, Fordham College at Rose Hill (FCRH)  ’14 and president of the College Republicans at Rose Hill, Will will be appearing on campus for a price comparable to other speakers invited to Fordham.  Conrad said he is awaiting final budget approval from SABC. As previously reported here, Coulter was to be compensated with $10,000 before the event was cancelled. The Coulter event was cancelled on Nov. 9, 2012 in response to student backlash against the Coulter and the College Republicans’ decision to invite her.

At “An Evening with George F. Will,” the OrgSync page for the event states, “Pulitzer prize winning journalist, author, and political commentator, George F. Will, will address the [student] body about current political issues (debt, entitlements, immigration, guns).” The event description also said that the College Republicans “100% expect a capacity crowd, as Mr. Will is the most distinguished and well respected person ever to speak on behalf of the College Republicans at Fordham University.”

Theodore Conrad, (FCRH) ’14 and president of the College Republicans at Rose Hill, said about the selection process, “George Will had always been high on our list. So, we immediately tried to pursue him and we were able to make it work.”

“He is a Pulitzer-prize winning journalist, author, he is highly regarded as one of the pre-eminent conservative writers and thinkers of, certainly, my generation and maybe the generation before me. So, when you look at his complete body of work, he is the type of person that the College Republican group would love to bring to campus,” Conrad said.

Following the Nov. 9 announcement to disinvite Coulter to campus, many supporters, board members, and alumni of the College Republicans were unhappy. “I think everyone is proud that we are bringing a speaker of the caliber of Mr. Will,” Conrad said of the latest announcement.

A dialogue was opened between the College Republicans and Will following the Coulter controversy.

“I have been communicating with Mr. Will directly for the past few months, with him personally and his secretary.  I’ve been trying to figure out a way to bring him up to Rose Hill,” Conrad said.

Even after the public backlash from students of Fordham and even a public, university-wide statement from Fordham President Joseph M. McShane, S.J., Conrad said that he and the College Republicans did not waste time in attempting to “[get] out there and […] find the best speaker, arguably, that we have ever brought to campus.” While many notable speakers have been brought to campus by the College Republicans, Conrad said , “George Will is in a class of his own. And people from the right and left both respect him tremendously for his contributions to the political discourse.”

“I think this was a learning experience for all of us,” Conrad said of the reaction to Coulter, “but we are happy that we are getting a speaker like Mr. Will and I think it is good for our club, it is good for the Fordham community, and we are happy to provide Fordham with such a high-caliber speaker.”

To read The Observer’s complete coverage of the Ann Coulter controversy, click here.