Who Said Jesus Was a Myth? 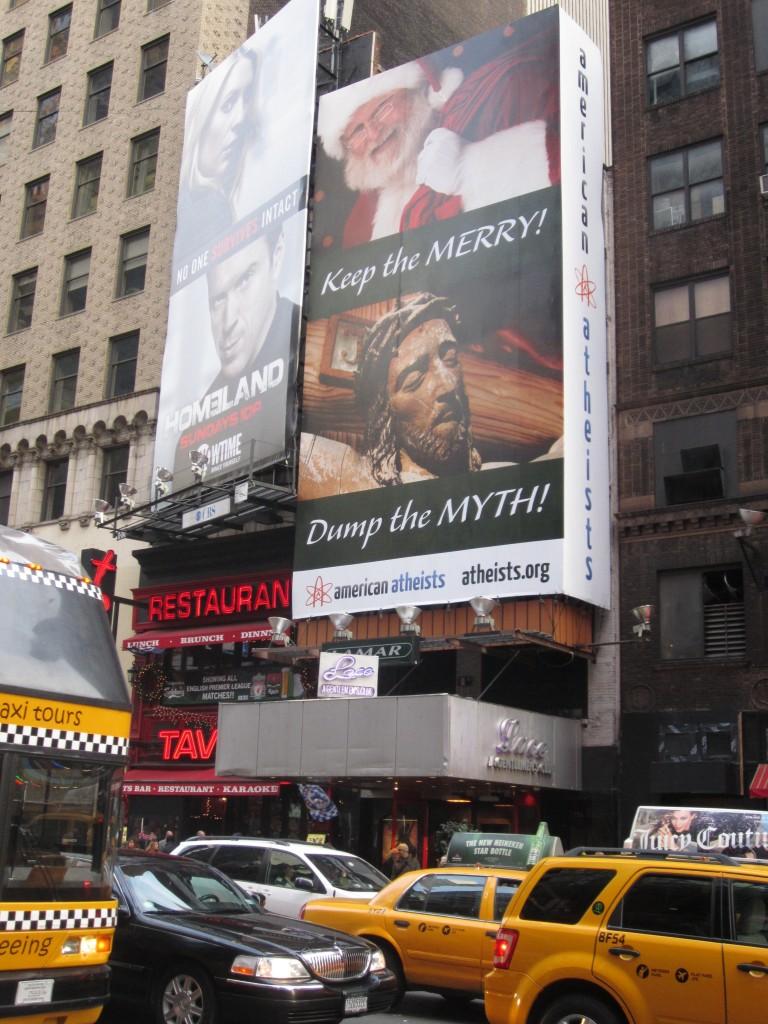 First Amendment aside, can't we share our views without unnecessarily offending others?

It’s deep into the holiday season and everyone can’t get enough of the commercialized cheer. Back are the “we are the world” ads featuring smiling people with ice cold Cokes in their hands, too good to be true storewide specials and embarrassingly bad pop remakes of our favorite carols. Though turned off by business’ exploitation of a sacred Christian holiday, I usually I keep my sardonic comments to myself each year, not wanting to ruin other people’s holiday fun. But one nonprofit’s violation of my beloved birthday boy on a tacky and obnoxious advertisement has pushed me over the edge.

The New Jersey-based American Atheists have taken it upon themselves to clear the air for those of us “closet atheists” who secretly don’t like being Christians but still want to open presents and drink hot cocoa in the name of Jesus. Their solution? Putting up an offensive billboard that says: “Keep the Merry!” under a picture of Santa followed by “Dump the Myth!” with a picture of Jesus Christ. Here’s the best part: it’s hanging up in Times Square to enlighten all the merry shoppers and their children, just in case little Timmy and Sara didn’t know the real reason why we celebrate Christmas.

I told you it was tacky.

The American Atheists have the right to share their beliefs to the public even when it clashes with mainstream values and ideas. However, what disgusts me about their billboard is that they could have easily made their argument without gratuitously insulting a whole religious group.

Officials from American Atheists say they put up the billboard to say that those who don’t believe in a higher power can still enjoy the wholesome festivities of Christmas. Fair statement, if I do say so myself. But why does that mean that they have to reduce my Lord and Savior to being a “myth”? Why do they think that this billboard is actually going to help those who publicly identify as Christian yet feel “trapped” by their religion feel more comfortable celebrating the big day?

People have every right to doubt whether or not Jesus actually had immortal powers. But it cannot be refuted that Jesus Christ was in fact a living person, nor can it be refuted that there are people whose love and devotion for Jesus is real and alive, regardless of how uncomfortable that may make non-believers. And if atheists want to separate Jesus from Christmas just so they can engage in the commercialized aspects of the holiday, then do so–respectfully. I have family members who have strayed from the pews of our Baptist church, but they can still open presents and sit at the dinner table like everyone else because they are sensitive to the beliefs of the faithful. They know not to spew their atheist ideas in others’ faces because Christmas simply isn’t the time or place. As much as an atheist wants to push Jesus aside so he or she can enjoy the holiday, he or she can’t deny that Christmas is the time to celebrate Jesus’ coming into the world.

Every society has its place for the doubtful ones, just as every society has its place for the faithful. And the two groups can and should interact with one another peacefully in the public sphere, tolerating (if not accepting) the other’s standpoints on religion. But debunking one groups views as myths and fairy tales is hardly the way to effective dialogue, much less the “true beauty” of the Christmas season that American Atheists seem so eager to participate in.