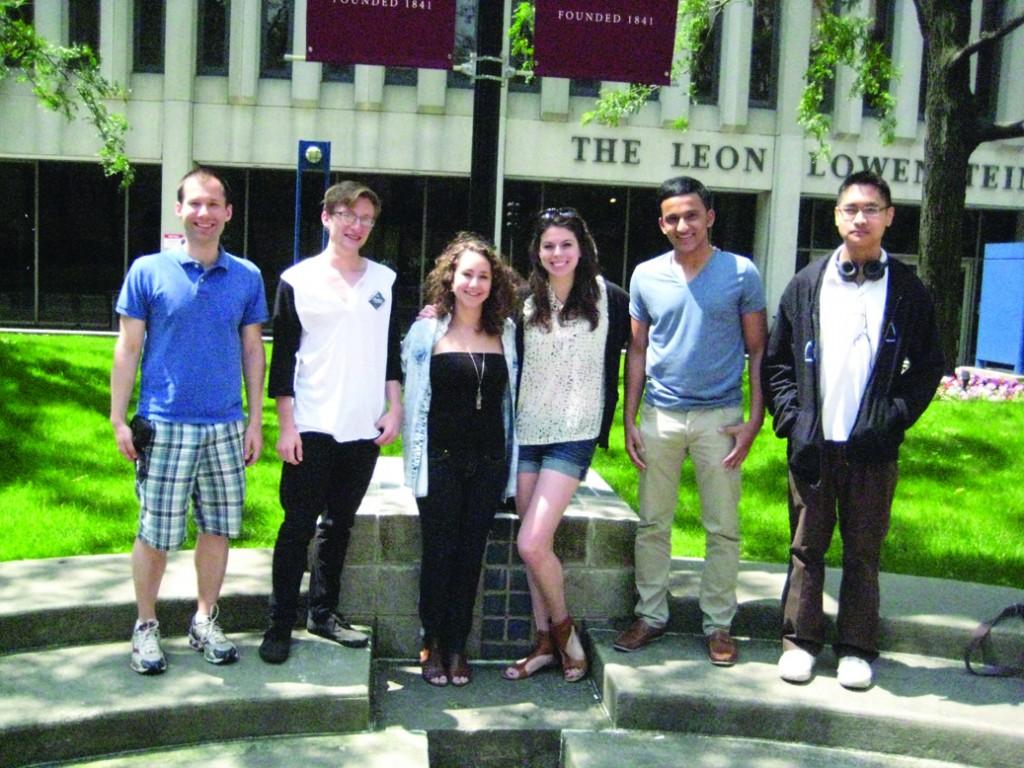 The recipients of the 2012 Summer Research Grants pose on the Outdoor Plaza. The grants helped them expand their studies outside of Fordham. (Photo Courtesy of John Wu)

At the beginning of the summer, 23 students at Fordham College at Lincoln Center (FCLC) received the Fordham Summer Research Grant. The grant allowed students to travel abroad and conduct research with a student chosen budget. The Observer sat down with Evangelos Razis, FCLC ’13, and John Wu, FCLC ’14, two of this year’s recipients.

Observer: What did you research and what was your research experience like?

E.R.: My work focuses on the roots of the current debt crisis in Greece. Most people who have covered the situation have done so either from the narrow perspective of an economist or, dubiously, of a cultural critic. I’ve argued since the start that this is first and foremost a political crisis. This project was an opportunity to pick up my research where I had left it off a few years ago—illustrating that the problem can be traced back to a social pact reached in the 1980s that consolidated modern Greece’s very young democracy.

Observer: Did you work solo, with other students or with a professor?

E.R.: Because I had spent most of my summer abroad, my research was carried out independently. Going forward, though, I’ll be working with Dr. Marcus Holmes to prepare a paper that I’ll be submitting to academic journals for publication.

Observer: Why did you want to get involved with the Fordham Summer Research Grant?

E.R.:  Well, my academic career has so far centered on research. I am grateful that the University has supported me the way it has, namely, by giving me the resources needed to grow as an intellectual. I think of myself as an aspiring political economist, and I wouldn’t know half of what I know about my field if it wasn’t for the summers I spent engaging with the work of some very important thinkers. It was only logical to reapply for the grant this summer.

Observer: What did you learn from the research experience?

E.R: I learned more about my research subject. I was able to refine my argument and add another layer of nuance. But, in general, I was able to better appreciate the different perspectives that the people I read were bringing to the table—and just as importantly, realize the limits of those perspectives.
I don’t really respect disciplinary boundaries, so a good deal of what I do involves reading the arguments people put out and squaring them with my own. Because the Greek crisis is such a new subject, and there’s not a lot of literature out there, the difference in perspectives is a bit more obvious. I also realized how unique my own work is. You’d be surprised how many people ignore history.

Observer: What did you research and what was your research experience like?

J.W: I am a math major and consequently my research is in math.  Bluntly, my research is on Conformal Blocks. If you do a Google search, I think you won’t be able to find something like a Wikipedia page that often does a good job at explaining or at least illustrating subjects in math to people who aren’t in the field.

At the moment most of the uses for Conformal Blocks are found in string theory, I think. The professor (a mathematician) that I worked with thinks that Conformal Blocks can be used in other fields if more research was done on them. Like any experience that takes so much out of a person for so long, it is a hard feeling to describe.

Because I am just an undergraduate, most of the work that I’m doing seems inconsequential and incomparable to just how much people have already done. The experience I’ve had revealed even more of the already bewildering world that I am stepping into. I worked for most if not all of the summer and it was a very rich experience. Even so, I was grateful to be a part of something.

Observer: Did you work solo, with other students or with a professor?

J.W.: I worked with Professor David Swinarski. During the first half of the summer, I worked with a group of four other students. Two of them had more experience in the subject than I did and had grants from outside of Fordham, another was pretty much in the same position as I was (similar level of experience and grant), and we had a freshman who was around to get some experience but was not really out to find results as the rest of us were. During the second half of the summer, we split into groups because we wanted to pursue different projects but since there were five of us, I ended up working alone.

Observer: Why did you want to get involved with the Fordham Summer Research Grant?

J.W.: I wanted something to do over the summer that was infinitely harder than any job I’ve ever had and didn’t pay anywhere near as much. I’m kidding. I wanted some experience that would be better than just getting a job over the summer for some extra money. Because I am planning on moving on to graduate school, research seemed perfect especially if I get to do research in math. What could be a more meaningful experience than actually contributing to something that you’re interested in?

Observer: What did you learn from the research experience?

J.W.:  I considered the math I learned to be extremely valuable especially because I never would have seen it as an undergraduate. Even being exposed to the nomenclature and process of mathematical proofs was also extremely helpful.

There isn’t anything specific I can point to when it comes to experience from working in a group but I’m sure I learned something, even if I didn’t really notice. There were small anecdotal things that I learned over this summer that will probably stay with me. I learned that organization is essential if you plan on stuffing two semester’s worth of material into a month and if you’re planning on using that information regularly.

I learned the library is extremely loud in the middle of August because people are organizing shelves or there are inexplicable noises coming from the walls. I learned that my math professor used to be an English major.

I learned that waking up an hour later than usual because your professor was busy in the morning is much more invigorating than learning that “class was cancelled” even if you get more time out of the latter. I learned that even after you’ve experienced how brilliant your professor is, you can still hear him say “I didn’t know that until this summer.”