A Spring Course, A Summer Adventure 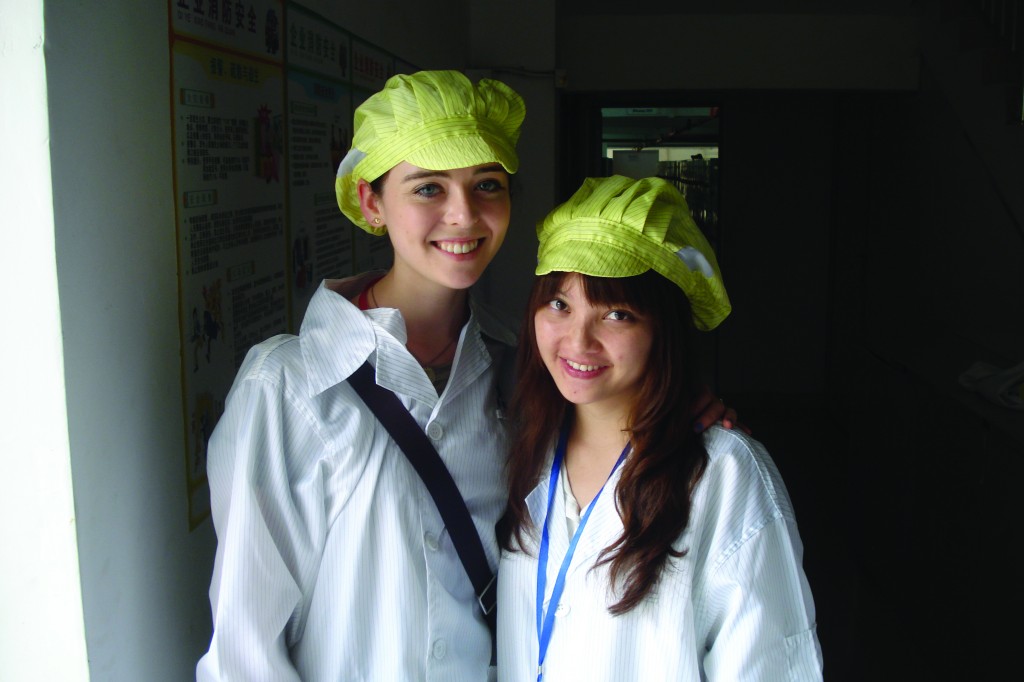 Heather Foye, FCLC ’14, and Janet, her Chinese roommate, pose in smocks and hats in an electronics factory. (Courtesy of Heather Foye)

At the start of last semester, international studies major Heather Foye, Fordham College at Lincoln Center (FCLC) ’14, didn’t know much about China. But by mid-May, she was standing atop the nation’s Great Wall. Two weeks later she returned to the United States, armed with a much more personal understanding of Chinese culture and politics.

Foye spent two weeks in China this summer as the study-abroad component of a spring semester political science course called China and the United States in the Era of Globalization, taught by Professor Thomas De Luca, Ph.D. Every Wednesday night last semester, the class met for three hours in Lowenstein, where Foye learned about the changing political relationship between the U.S., the political giant of the past century, and China, this century’s fast-rising powerhouse.

But when Fordham’s classes let out for the summer, Foye’s real coursework began. De Luca’s class traveled halfway around the world to Sun Yat-sen University in Guangzhou, where they would live with Chinese students and hear lectures on political science from Chinese professors.

In preparation for the trip, the classmates did readings, engaged in political discussions and went on class-specific outings, like a screening at the Asia Society of a documentary about Richard Nixon’s historic visit to China in the 70s. On the last day of class, the students ate Chinese food and discussed their upcoming adventure. Then, it was time to set off for their first stop—sightseeing in Beijing.

Wonders of the World

Foye and the group boarded a plane for China on May 21, and by nightfall they were in the capital city, enjoying a typical Chinese meal and entertainment by singers and dancers in traditional Chinese garb.

The next few days were devoted to visiting some of China’s most famous attractions: the Forbidden City, Tiananmen Square and the Great Wall. Foye’s favorite was the wall, where the group split up, half of them (including Foye) choosing to scale the giant monument. The day was hot and the walk was steep, but Foye was impressed with the astonishing mountain vistas and the Great Wall itself. “I can’t even put into words how it was to see one of the wonders of the world,” she said. “It just goes on for miles and miles.”

Foye hadn’t been particularly close with her classmates over the course of the semester in New York—the classroom atmosphere just wasn’t conducive to making a group connection, she said. But as she trekked up the Great Wall with her peers, the group began to click. “Struggling up that hill was definitely a way to bond with people,” she said. Soon, though, the Fordham students would have another group to bond with—the students at Sun Yat-sen.

Sun Yat-sen University has three campuses in the city of Guangzhou and is home to around 36,000 students. The school itself, Foye said, was in the middle of a city, like Fordham. But Sun Yat-sen is much bigger, she explained, with a campus feel.

Upon arrival at Sun Yat-sen, Foye was paired with a Chinese roommate named Janet. Janet brought Foye a cake as a welcome gift, and the two became fast friends. They began every morning by eating breakfast together at the university canteen, where Janet would encourage Foye to try new Chinese delicacies each day. When she learned that Foye was a part of Fordham’s a cappella group, Janet took to singing American songs. Soon the two were chatting nonstop. Foye was grateful to have such a friendly Chinese host to welcome her into a country that was so new to her. “She made my experience so much better, having someone to talk and bond with,” Foye said. “She was exactly how a host should be.”

Foye was surprised by how well the Chinese students spoke English and how easy it was for the two groups to carry on discussions about advanced political topics. There were a few minor cultural gaps that reminded Foye that the two groups came from different societies. For example, Janet refused to drink her beverages cold, since in China cold beverages are seen as less healthful than warm ones. Even during the heat of late May, the Chinese students drank hot tea with every meal, Foye said.

But more striking than the Chinese students’ culinary idiosyncrasies was how hard they worked to make sure that the Fordham group had the best trip possible. They were unfailingly kind and excited to chat with the American group, and even got the Fordham students into the university’s big performance event of the semester—a singing competition—without tickets. “The Chinese students we met were so open and willing to make us comfortable,” Foye said.

In class at Sun Yat-sen, the students heard a lecture from a new professor every day. One detailed the election systems in urban Chinese villages. Another focused on female sex workers in Guangzhou and the dilemmas rural Chinese women face when moving into cities. Foye learned that rural women who lack formal education are often forced to choose between working in factories or as sex workers, and many choose the sex industry because if offers shorter hours and higher pay.

Foye said she was struck by the differences in the roles of women in politics between China and the United States. Though China has modernized quickly over the past hundred years, women there have not made the strides in government that women in the United States have. Of the 30 most powerful government officials in China, all are men, Foye said.

Despite some of the less democratic systems in place in China, Foye was impressed by the open political attitudes of her Chinese peers. At first, Foye expected that the Chinese students wouldn’t be as receptive to open discussion as their American counterparts, due to their exposure to the intense restrictions on free speech imposed by China’s communist government. She found that the reality was just the opposite. “The students were very willing to hear other opinions and admit that there are flaws in their system,” she said. That revelation, she said, gave her faith in the possibility of a positive relationship between the United States and China for future generations.

By the time she left China, Foye had new Chinese friends and a new understanding of how China operates politically. The experienced sparked her interest in China and surrounding Asian nations, and she hopes to learn more about them as she continues her study of international politics. She remembers climbing the Great Wall and meeting Janet as highlights of an adventure that helped her scrape the surface of knowledge about the Chinese political system. Now, she plans to delve further into the subject. “I think [the trip] was a good beginning step,” she said, “but there’s so much more to learn.”

Anyone looking to follow Foye’s path and gain firsthand knowledge about China’s politics can look to go on this year’s trip. The same four-credit political science course that Foye took will be offered again this spring. Students can opt to participate in just the trip or both the class and the trip, which will take place from May 20 to June 2, 2013.