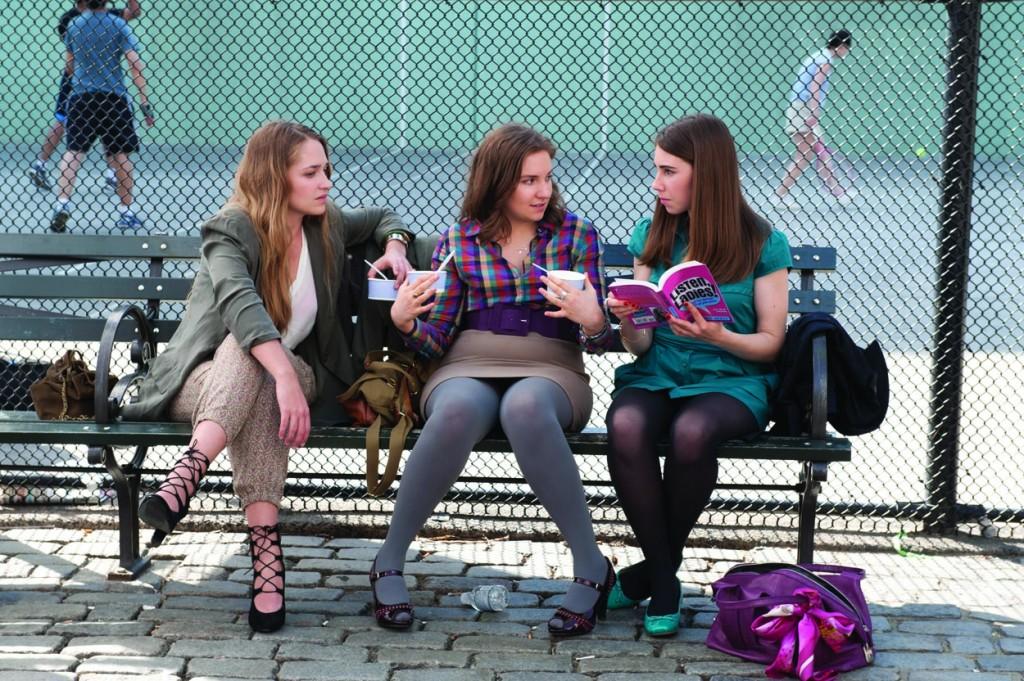 The main character of “Girls,” Hannah (Lena Dunham, center), is hardly a role model and is more annoying than fun to watch. If this is the average New York City 20-something female, the future of this town is in unsteady, self-absorbed hands. (Jojo Whilden/HBO)

On April 15, HBO premiered the new show “Girls.” The series claims to accurately portray life as a 20-something female in New York City. It focuses on Hannah, a writer who is the self-proclaimed voice of her generation, but Carrie Bradshaw she isn’t. An emotional eater reliant on her parents and insecure when it comes to men, Hannah doesn’t know the first thing about adulthood. If she is supposed to be the voice of my generation, I’m a little concerned.

Maybe Hannah is supposed to be the anti-hero, but to me she’s simply annoying. She’s self-centered and self-loathing, and when her parents tell her they’re finally cutting her off, she gets high on opium and demands $1,100 a month for the next two years rather than take command of the situation. When her parents vent their frustration, Hannah replied, “I am busy trying to become who I am.” Maybe Hannah should exert her efforts on trying to become an adult, because she seems to be failing miserably.

In the New York Magazine piece “It’s Different for Girls,” author Emily Nussbaum claims “Girls” is “a show about life lived as a rough draft.” If that’s the case, then Hannah’s life could use some heavy editing.

It could also use a new title. “Girls” is presented as the typical life of a New York City girl, but it’s more like “White Girl Problems 101.” Hannah’s biggest concern is her weight, her best friend is dating a wonderful guy she can no longer stand and her other friend is a glamorous world traveler. They’re all white, privileged and a little too pretty, except Hannah, who repeatedly reminds us of how awful she looks.

If I can give this show any credit, it’s at least in its ability to dash the idea that living in New York City is a cake walk. This town is more like a multi-faceted obstacle course, a la “Legends of the Hidden Temple,” where we may or may not get grabbed by a local and lose our way before we manage to get out alive.

Shows like “Girls” are trying to portray this struggle, which is admittedly refreshing since shows like “Sex and the City” and “Gossip Girl” often present New York as a glossy, glamorous place. However, anyone who lives here knows that’s not the case. The subway is hardly a joy to ride, getting a taxi driver to smile is like trying to break the Queen’s Royal Guard and going to the grocery store is the equivalent of “Supermarket Sweep.”

The entertainment world is finally catching on to this reality, and I give props to “Girls” for at least trying to give us a show about females who don’t live it up the “Sex and the City” way and whose closets are more likely to be filled with Forever 21 bargain wear than vintage Armani ensembles.

I know post-grad life will be a challenge, and “Girls” doesn’t deny that. After four years of college, I’m more aware of how to write 20-page research papers than write cover letters or file tax returns. I’ve had a couple of great internships that have prepared me for a “real job” and then a couple where all I did was manage twitter accounts.

At one of my internships, I was surrounded by graduated seniors who hoped to get a job at the company eventually. Of course, by the end of the summer, all of them were still jobless and while they added to their resumes, they hadn’t added to their bank accounts.

“Girls” succeeds in representing that sad reality. Hannah faces a similar problem in her work life. She has had the same internship for a year without pay, and when she asks for a salary, her boss laments that he’ll have to let her go, even though he’d wanted her to start controlling their Twitter account. Apparently, Hannah’s degree in English will only get her so far.

With my degree in history and communications, I imagine I’ll be facing a somewhat similar fate, but I hope to handle it with more grace than Hannah. Like Hannah, I’m probably what many would consider a privileged white girl, but I don’t plan on drowning my sorrows in opium as Hannah does  anytime soon. Most girls I know are hard-working and eager to prove themselves to their parents, but this show suggests otherwise. Maybe “Girls” will grow over time and so will Hannah, and I hope it does, because right now, I’m a little concerned about the message it’s conveying about my generation.