“Dark Money” Destroys the Integrity of the Election Season 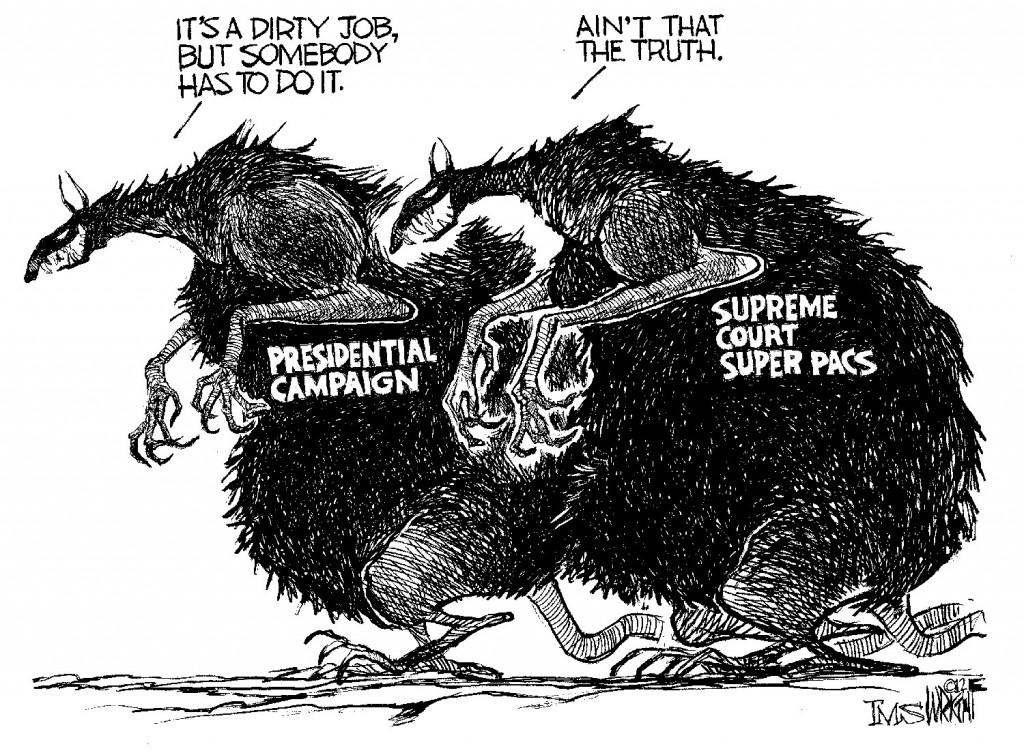 It is hard to determine where candidates are getting their money from noawadays. This controversial issue has become so prevalent that it is now the subject of parody in political commentary. (Don Wright/MCT)

Everyone has heard of Super PACs, those ultra-powerful, ultra-rich organizations that can use their funds for whatever they please, so long as they don’t have direct coordination with a candidate. As Andrew Rosenthal of The New York Times explained in his March 25 piece, “When Other Voices Are Drowned Out,” corporations can now donate millions upon billions of dollars to a Super PAC that supports a candidate they want in office, and they don’t have to disclose these funds. All of this is mostly common knowledge among interested parties. However, the new hot button Super PAC topic is the possibility of these corporations (or independently wealthy donors) writing their donations off on their taxes.

The effect of money on how successful a campaign is and who wins an election has been proven time and time again. A candidate backed by a lot of money can afford a lot of air time and a lot of advertisements. Such candidates can hire more staff to spread the word and they can travel around the country at their leisure. They can afford to take risks and chances that a candidate with fewer funds could not.

Money undeniably has a loud mouth and a big voice. That is why the subject of “dark money” is so significant. Because these Super PACS like the Red, White and Blue Fund (pro-Santorum), Restore our Future (pro-Romney) and Winning Our Future (pro-Gingrich) have so much control over our political discourse, there is no reason that they shouldn’t be required to be absolutely forthright about where their money is coming from and how big their donations are.

Every citizen who wants information on their candidate should have as much as possible; who a candidate gets money from says a lot about their character, and it says a lot about their beliefs. A candidate that opposes abortion may find it disadvantageous to advertise his belief, but if he’s receiving dark money from anti-abortion groups, the public will be unaware and uninformed. An uniformed voter is equal to a deceived voter— in each case, the people’s power to make an informed and purposeful decision is undermined.

And even if they’re not required to disclose where that money is coming from, there is no way the donors—both corporate and individual—should be allowed to write that money off on their taxes. This is not a charitable donation. It is, in effect, lobbying for a candidate and a cause. It is an attempt, usually successful, to feed their special interests by putting a friend in office. Taken a step further, this money buys their interests support. I don’t think anyone wants to live in a world where politicians cater more to their rich, insular, special interest-guided donors than to the majority of their constituents.

The practice of donating “dark money” undermines our political system. We are no longer a democracy when secret moneys are being sent from secret sources and when that money goes on to make or break a campaign. Santorum and Gingrich would have been long gone from the Republican primary without their Super PACs. As it stands, Santorum still has a horse in this race, and it’s thanks to dark money.

Because of their money and all the power these donors wield, they remain unaccountable for their actions. They directly affect campaigns, elections and American politics, yet the American voter has no information and more importantly, no say. If a third party can exert that much power over an election, what use is my vote and my voice?

I happen to believe that donating to a campaign is the same as saying, “I am very partial to my money and would rather not get rid of it, but I believe in this candidate so much I’m willing to sacrifice some dollars to help him campaign.” The way these corporations are doing it, though, is donating millions and millions of dollars that they’ll write off on their taxes like a reset button. They essentially give nothing to get what they want, and I find that to be an abhorrent display of disrespect for our campaign system.

The American political system is propped up on lofty ideals of democracy, choice, freedom and equality. It’s too bad that these ideals do not translate to reality. The thin line of what is legal and what is not is being toed with increasing frequency in American politics. When obscene amounts of money donated by wealthy, mysterious, powerful donors overshadow the voice of the American people, the election system becomes a farce.

At what point does this all become unreasonable? Millions of dollars are spent on attack ads,  fundraisers,  airtime and rallies, and zero of it benefits the American people. Our country is broke. Surely all this money being thrown away could be put to better use than buying an election.