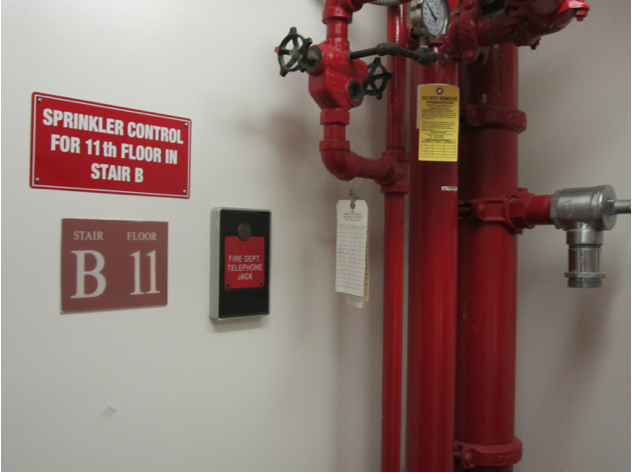 On Feb. 27, a resident of McMahon Hall found homophobic graffiti written on stairway B between floors 11 and 12. (Harry Huggins/The Observer)

By LAURA CHANG and HARRY HUGGINS

UPDATE: Another racial slur has been found in a Rose Hill dorm, this time in a bathroom in Goupil Hall. According to a mass-email sent by Senior Vice President for Student Affairs Jeffrey Gray, Fordham Security is conducting another investigation, and there will be floor meetings in the residence hall later tonight held by Office of Residential Life. Gray also announced student-planned vigils taking place March 8 at Rose Hill and Lincoln Center. Gray’s letter continued to once again condemn the recent events. “As a Jesuit university we rightly hold ourselves to elevated standards of speech and behavior,” Gray said. “The individual or individuals who have committed these acts fall woefully short of those standards.”

Following the discovery of a homophobic slur written on a McMahon Hall stairwell early Feb. 27, Fordham held a town hall discussion where students debated a proposed mandatory diversity program for future students. The administration has also condemned such acts inexcusable, promising punitive acts toward any student found linked to the crime.

According to Jenifer Campbell, director of Residential Life, the words “gay” and “loser” were written in the B stairwell on the 11th floor of McMahon Hall.. She said that after a student discovered the offensive language, a staff member was contacted which alerted maintenance, facilities and security. There are no cameras in that stairwell.

Campbell described the immediate actions of the security staff. “Security took a photograph of what was written: the word ‘gay’ on the standpipe, and on the signage it said ‘loser’ and ‘gay’ in writing akin to the sign there,” Campbell said. “So they were able to wipe it off, and then procedurally, we’re doing an investigation and follow-up.”

This is the second offensive slur to happen at Fordham in a month. On Feb. 7, a Residential Assistant (RA) found a racial epithet written on her door in the Rose Hill campus’ Walsh Hall. As a result, dean of students at FCLC Keith Eldredge gathered the FCLC community during a town hall meeting on Feb. 22. Since the homophobic slur hit this campus, Eldredge said that the behavior on both campuses is unacceptable and that it was important to hold this second town hall meeting. “It’s not appropriate; it’s not part of what it means to be a Fordham community member,” he said.

“We had a conversation last week about what happened at Rose Hill…about what we can do to make Fordham a better place,” Eldredge said. “Now that we’ve had something on our campus, we need to do more than what we’ve planned [to do].”

The conversation continued at a town hall meeting hosted by Campbell and Residential Life on Feb. 28 in McMahon Hall’s eighth floor lounge, three floors below where the incident occurred. Much of the discussion, attended by students and administrators from a wide range of clubs and departments, focused mainly on whether or not there should be a mandatory diversity training for incoming students. Fordham officials are considering the implementation of a mandatory diversity program, but the details are not yet concrete, according to Campbell.

Other topics discussed included the responsibility of students, especially student leaders, to encourage and enforce an accepting environment for all Fordham community members. Administrators and students alike echoed this message of peer responsibility, as well as the need to ensure that Lincoln Center students feel safe at their college homes. Although some students complained about a lack of communication between administrators and students, others applauded the quick reactions to this second incident.

Daniel Drolet, FCLC ’12 and vice president of Rainbow Alliance, said that he was impressed by Fordham’s “quick and
diligent” response.“Because this incident was written in a public space, [Fordham was] able to take immediate action in addressing this,” he said. However, he wonders if the response would have been as immediate if the previous incident did not happen.

Jeffrey Gray, senior vice president of student affairs, was one of the administrators that responded immediately to the incident and sent a blast email to the Fordham community on Feb. 27. “There is no room at Fordham University for bigotry of any kind, directed at any individual or group,” Gray said in an email.

FCLC’s United Student Government (USG), also tweeted about the incident on the same day: “Any form of bias or slur is absolutely unacceptable at Fordham. We stand against the homophobic slur in McMahon Hall.”

“We as students must always remember to never accept any acts of prejudice, bias or hate,” FCLC ’12 and president of USG Ryan O’ Toole said. “I strongly condemn this act and I promise that USG will do everything it can to promote a community of love and respect amongst all students at the Lincoln Center campus.”

In addition, Campbell said that she wants students who feel “marginalized” or out of place in the community to reach out to Residential Life so that they are aware of these feelings. “All of the offices––Counseling, Mission and Ministry, Residential Life, Dean of Students, OSLCD––are here to help students having difficulties with these issues,” she said.

Dear Members of the University Community:

On Friday, March 2, Custodial Services discovered a racial slur in a bathroom in Goupil Hall. Administrators in Student Affairs and Security were notified immediately and responded to the hall.

We are disturbed that this is the third bias-related incident reported in less than a month at the Rose Hill and Lincoln Center campuses. There is no indication that this incident is related to the previous two, but we are taking these occurrences very seriously.

An investigation by Fordham Security is already underway. As always, the investigators are taking a multipronged approach, which includes interviewing potential witnesses, examining the physical evidence, and employing various other resources within the University. We strongly encourage anyone with information on this, or any other, incident to report it to the staff in Residential Life, Multicultural Affairs, Security or the office of the Dean of Students—in strict confidentiality, should you so desire.

The Office of Residential Life staff will be holding floor meetings in the residence hall today, and is working at both campuses with student government leaders who join the administration in condemning this behavior and in asking that it end, in the interest of all students and the University community. In addition, the University encourages all of its members to participate in the vigil that student groups are planning, which is scheduled to take place at Rose Hill on Thursday, March 8. A similar event is being planned for Thursday, March 8, at Lincoln Center. We also encourage your active participation in ongoing initiatives which will be sponsored in collaboration with student government leaders. These and other ongoing programs by student groups and offices around campus will be advertised in the coming weeks as well.

The Fordham community should know that we will not hesitate to pursue internal disciplinary measures, and criminal prosecution, should the circumstances warrant it. Such behavior is unacceptable, and in fact antithetical to Fordham’s values and mission. Bigotry has no place in civilized discourse, much less within the walls of the academy. As a Jesuit university we rightly hold ourselves to elevated standards of speech and behavior. The individual or individuals who have committed these acts fall woefully short of those standards.

My office will keep the University community informed of any progress in these investigations. Let me remind you that, under University policy, anyone who feels they are the target of a crime–bias or otherwise–may file a police report, and will be assured of the University’s assistance and support in doing so.